A country where everybody fought against
everybody

A war that was waged on the premises of Olympic sports stadiums.

Bosnia and Herzegovina had been a relatively peaceful place for a long time with the Serbs, the Croats and the Bosnian Muslims living together. After the Second World War the country prospered, although its economy was a weaker one within the Yugoslav Federation. The country had a high employment rate, a relatively strong economy, and a good social and education system. In 1984 it even hosted the Winter Olympic Games. A decade later the sports stadiums in Sarajevo and many other places all over Bosnia and Herzegovina changed beyond recognition. Two thirds of all victims of the Yugoslav wars came from this country.

Seventy years after the 1914 assassination we have the Olympic Games. The world will speak about Sarajevo again, but this time it will be happy talk. 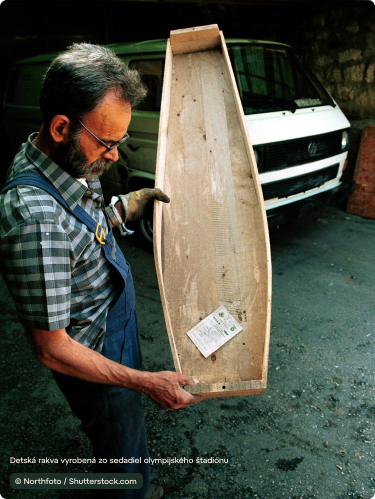 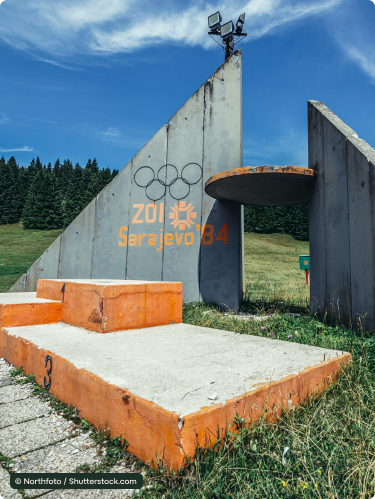 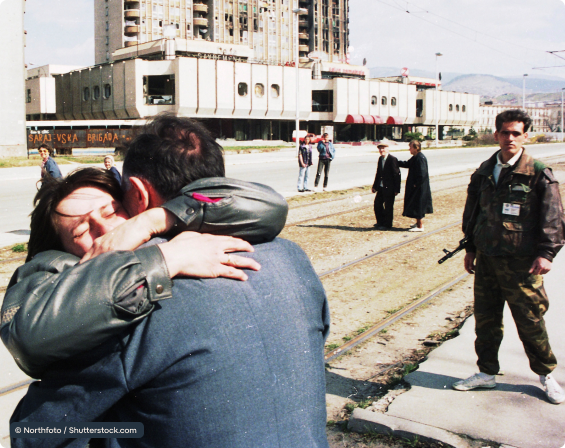 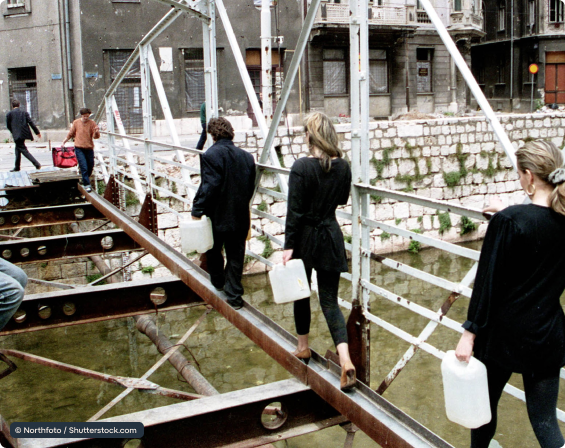 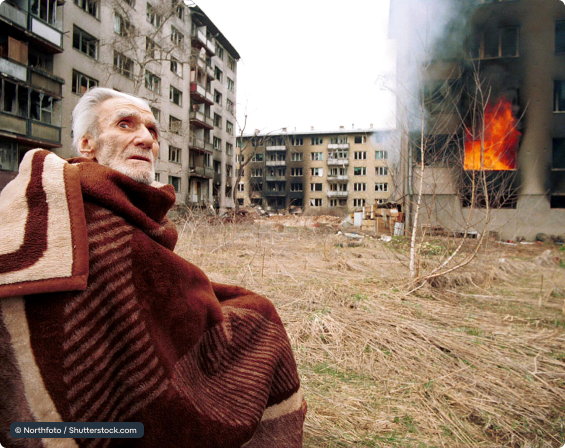 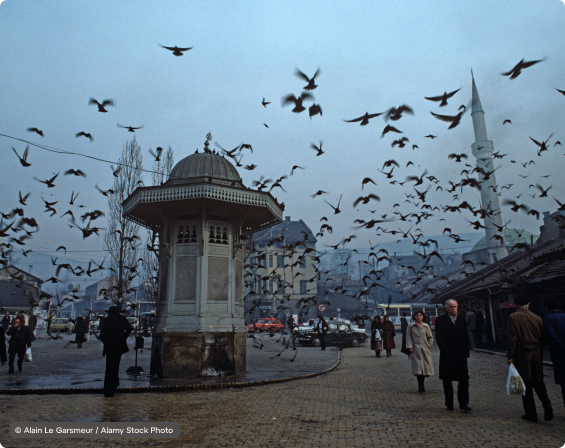 Both countries wanted to seize all territories in Bosnia where their national minorities lived. However, a problem occurred in Bosnia and Herzegovina where the populations of various nationalities were mixed across the country. They did not live in well separated areas that other countries could easily “appropriate”. Additionally, the constitution of Bosnia and Herzegovina secured equal rights for the three majority nations – the Serbs, the Croats, and the Bosnians. No nation had either a minority or majority status.

After long negotiations Bosnia and Herzegovina declared independence from Yugoslavia in March 1992. The Republic was acknowledged by the Croats and the Bosnians, the United States of America, and the European Union. However, the Serbs boycotted the republic and declared part of its territory their own Republic of Serbia.

How our
people turned
into foreigners

As the negotiations ab out the independence
went on, the Serbs were already deploying the
Yugoslav army at strategic points in Bosnia and
Herzegovina. The same was quickly done by
the Croats as well.

This resulted in the most chaotic and bloodiest
war in Europe since the Second World War:
human rights were violated, international
agreements were breached, large numbers of
women were raped, tens of thousands of
civilians were cruelly murdered, and members
of the three nationalities fought against one
another.

Sarajevo: the city that survived
the longest siege in history

The inhabitants of Sarajevo fell into a trap. They were an easy target for snipers from the surrounding hills. Almost no one was safe anywhere. The snipers aimed at people who were carrying water canisters, or who were standing in queues. They fired at people on bicycles and at rescuers. Another danger was the grenades: where people were killed by shrapnel, the pools of blood were delineated by colour – they are now the roses of Sarajevo.

Attempts to lead
a normal life

The people of Sarajevo managed to survive thanks to their “typical” stubbornness and improvisation. Lawns were turned into gardens. They made makeshift ovens and learned to boil alkaline batteries in salty water so that they could be used again. A football stadium was turned into a cemetery; too many people were dying. 12,000 citizens died during the siege of the city.

At the beginning of the siege the people thought that the world would come to the rescue. However, after six months they realized they were on their own. They tried to manage their life so that it would be at least a bit normal. 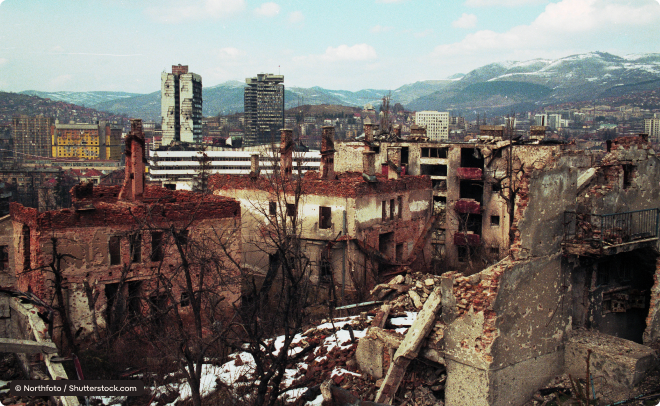 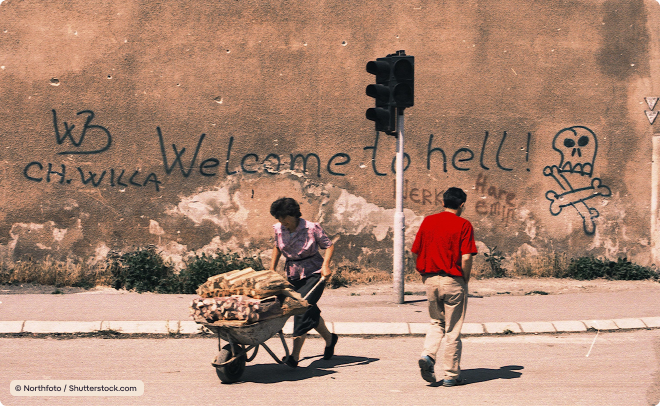 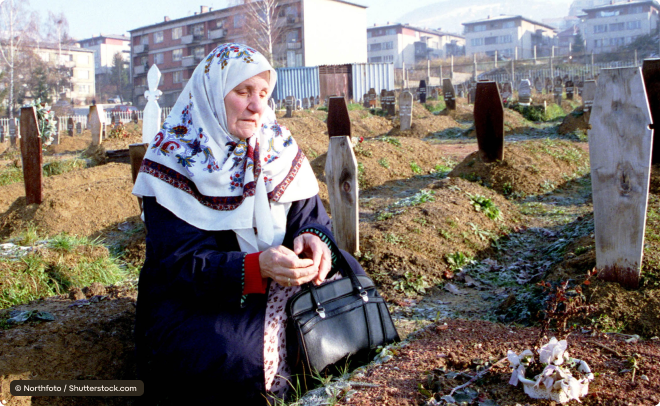 The schools and universities started to work again in an improvised regime. Children in groups between 15 and 20 went to schools that were organized in flats. It was worth losing one teacher rather than put many children at risk. Trying to live as normally as possible was a type of spiritual resistance in Sarajevo.

The war was also wiping out the cultural and spiritual heritage. The inhabitants of Sarajevo organized one hundred concerts of classical music and founded the national branch of the worldwide organization of writers PEN International. In August 1992 the enemy shelled the buildings of the national and university libraries that stored more than one million books. The libraries were set on fire, and only half of the books were saved. Also, a film festival was started during the siege in 1995. It gained world renown and is now attended by many international stars.

Romeo and Juliet of Sarajevo

A Serbian Boško and a Muslim Admira wanted to flee from the besieged Sarajevo through the front line in May 1993.

“I looked out of the window and saw a girl and a young man running along the other side of the bridge. Before I was able to take my camera out, it was too late, both were hit by bullets,” recalled American reporter Mark Milstein. The first bullet hit the man and killed him straightaway, the second one injured Admira heavily. She crawled to her boyfriend and they both died hugging each other.”

Their dead bodies were left on the bridge for a week. On the eighth night after their deaths, they were transferred to the Serbian side and temporarily buried. In the meantime, the story about the Romeo and Juliet of Sarajevo was already spreading around the world. Boško’s mother does not like that comparison. She says their families did not have anything against their love. The person who killed the young lovers has not been identified.

Srebrenica: a massacre in the spotlight of cameras from the whole world

Commander Ratko Mladić
As he was distributing snacks, his soldiers were separating people for death.

The commander of the Army of the Republic of Serbia Ratko Mladić committed the most brutal war crimes in Europe since the Second World War: the genocide of non-Serbian citizens of Bosnia and Hercegovina. The genocide was the most drastic in the region of Srebrenica. He was sentenced for life imprisonment for his war crimes by the International Criminal Tribunal for the Former Yugoslavia in The Hague, the Netherlands.

People all over the world learned about the massacre in Srebrenica because of Mladić’s cruel manipulation and lying. Srebenica had been besieged since the summer of 1992. Both the Serbs and the Bosnians committed violence in and outside the city. As the politicians and military leaders of the Bosnian Serbs aimed at having an ethnically clean territory 30 kilometres westward of the River Drina, Ratko Mladić sent thousands of boys and men to their deaths (the exact number has never been identified). He did it in front of the eyes of the whole world.

The peace-keeping forces UNPROFOR, known also as the blue helmets, were deployed on the territory of Srebenica. Part of their mission was to protect civilians and approximately 40,000 Muslim refugees, who were hiding in the city. Srebenica was situated in the so-called safe zone and was under the protection of the blue helmets. The Serbian Bosnian commander Ratko Mladić spoke of a safe evacuation of the civilians as he was giving away bread and snacks to them. There were cameras that broadcast this scene to the entire world.

However, at the same time, his units were selecting men and boys to be murdered. People heard gunfire and some were so frightened that they committed suicide. Although members of the Dutch peacekeeping force knew what the Serbian units were doing, they gave over 239 men (eligible for army service) to the Serbs. 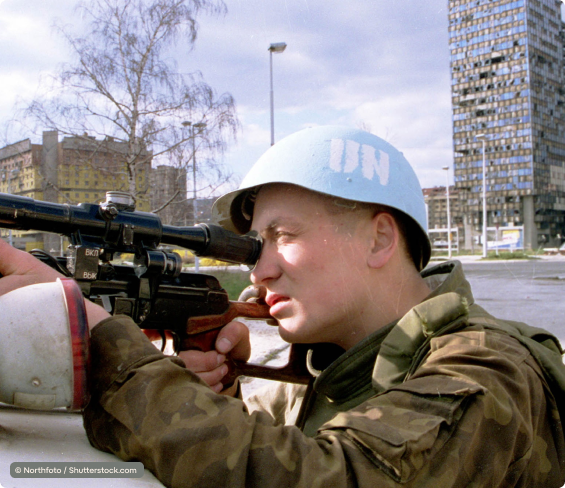 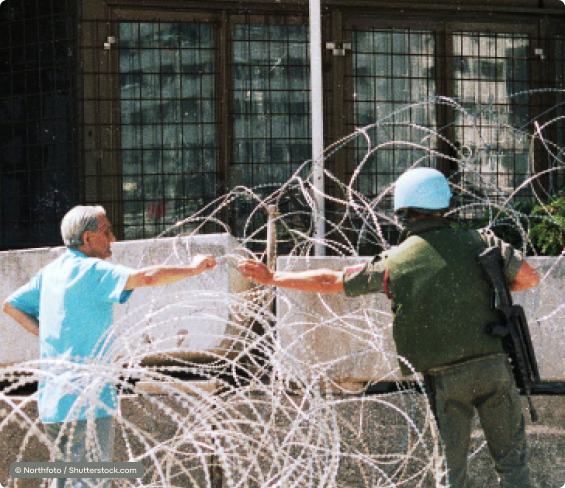 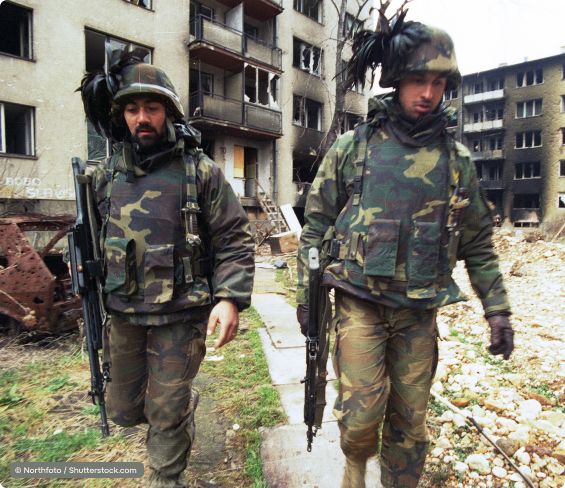 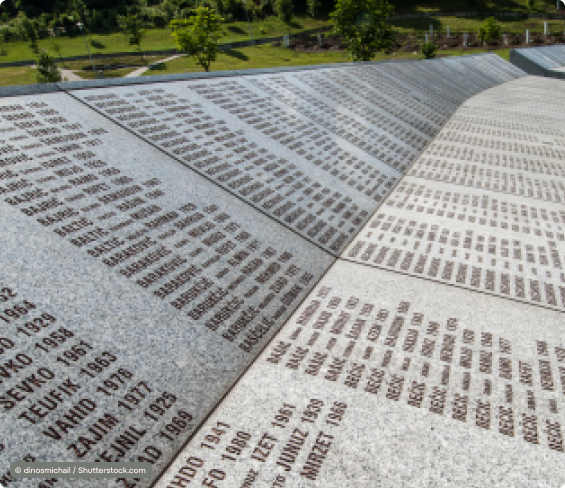 The mandate of the blue helmets was primarily monitoring, and they could use force only for self-defense. The peacekeeping force was composed of Dutch soldiers whose equipment and potential were no match for that of Mladić’s army. They were able to protect only themselves but not the inhabitants who lived in Srebenica and the surrounding areas.

Punishment for the perpetrators
of the genocide

Tribunal in The Hague

The International Criminal Tribunal for the Former Yugoslavia was established in 1993 in response to the serious violation of international and humanitarian law. The tribunal began to work when the people suspected of committing war crimes were still in power and they did not feel any obligation to cooperate. According to investigator Vladimír Dzura only twenty out of 161 charged suspects accepted their guilt at the Tribunal in The Hague.

The perpetrators were divided into groups depending on their willingness to accept their guilt: 1) people who were blameless before the war, 2) criminals that acted as parasites before and during the war, 3) members of the elite – doctors, military commanders, and politicians. The criminals and politicians equally rejected accepting their guilt, only their motives were different.

The Hague tribunal did not prosecute people who had been killing, stealing and raping – this was the role of the local authorities. The tribunal prosecuted only those who were in charge of the war crimes. The Tribunal removed Karadžić, Milošević, and Mladić from politics. The Tribunal’s importance surpassed the framework of the Balkans – it became an example of how international righteousness can be applied in war conflicts. 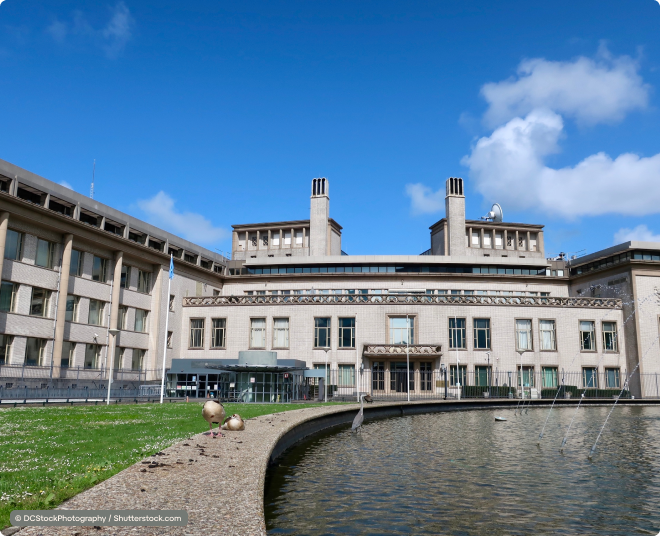 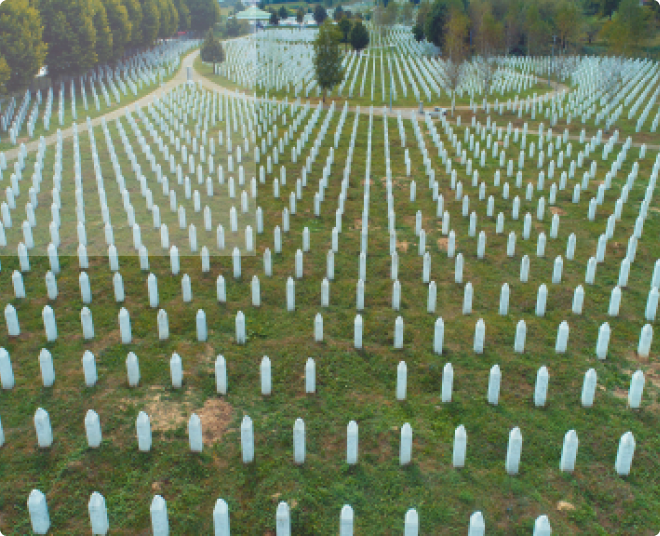